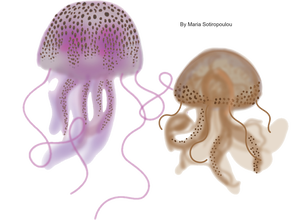 Pelagia noctiluca in the Mediterranean Sea

​Abstract
Over recent decades, man’s expanding influence on the oceans has begun to cause change in some regions, including in the Mediterranean Sea. New prolif- erations of jellyfish may be occurring in the Mediterranean Sea, possibly in response to the cumulative effects of some of these anthropogenic impacts. In the Mediterranean Sea, many of these “proliferation events” are due to Pelagia nocti- luca, an oceanic scyphozoan that has become very abundant along the coasts. Pelagia noctiluca is usually considered to be the most important jellyfish species in the Mediterranean Sea due to its widespread distribution, abundance, and ecological role and also because of its negative interaction with humans. Climatic conditions that favor enhanced reproduction by P. noctiluca and probably also determine opti- mal conditions for the formation of blooms are characterized by mild winters, low rainfall, high temperature, and high-atmospheric pressure. The Medusa Project in Catalonia aims to understand the spatiotemporal dynamics of the jellyfish popula- tions in the NW Mediterranean Sea by undertaking daily sampling during summer (May to September) of 243 beaches, covering more than 500 km of coast. Data on beach strandings along the Spanish Catalan coast revealed that jellyfish occur in greatest concentrations along the northern Catalan coast and on beaches located close to marine canyons. The arrival of P. noctiluca to the coast depends firstly on the offshore production of jellyfish. Oceanographic structures like fronts, which enhance and maintain high levels of biological production and provide ideal conditions for feeding, growth, and reproduction of the jellyfish are present in the NW Mediterranean. The weakening of the front results in large numbers of P. noctiluca being driven into the coast by southeast winds. In the NW Mediterranean Sea P. noctiluca exert top-down control over a variety of prey including fish eggs and possibly the invasive ctenophore Mnemiopsis leidyi. P. noctiluca is also responsible for the majority of the stings incurred by bathers along the Catalan coast. Finally, we recommend that similar sampling programs should be done elsewhere to better understand changes in the distribution, abundance, and blooming patterns of dangerous jellyfish species.
Διαβάστε την επιστημονική δημοσίευση: ​https://www.researchgate.net/publication/259081911_Pelagia_noctiluca_in_the_Mediterranean_Sea
Distribution of Pelagia noctiluca (Cnidaria, Scyphozoa) in the Ligurian Sea (NW Mediterranean Sea)
​
​AbstractThe scyphozoan Pelagia noctiluca reproduces by direct development without a benthic stage. Typically, this jellyfish is found offshore with a holoplanktonic lifecycle, vertical migration and feeding behaviours. Frequent outbreaks have been well documented on the Mediterranean shores since the 19th century; however, the offshore distribution of this species remains mostly unknown. In this study, we performed a bimonthly monitoring of P. noctiluca surface density, at high resolution, from a sailboat, along a 35-km coastal to offshore transect in the Ligurian Sea, between February and October 2011. During daylight, P. noctiluca was rarely seen. At night, offshore, P. noctiluca was always present, while within 5 km of the coast, P. noctiluca was rarely observed. Pelagia noctiluca aggregations were most abundant within the Northern Current of the Ligurian Sea. Our findings suggest that P. noctiluca outbreaks observed on Mediterranean shores may result from the transport of the permanent offshore population inshore by specific hydrodynamic conditions.
Διαβάστε την επιστημονική δημοσίευση: ​https://academic.oup.com/plankt/article/34/10/874/1455940​